GM Sees Path to Profit in Second Half After Quarterly Loss 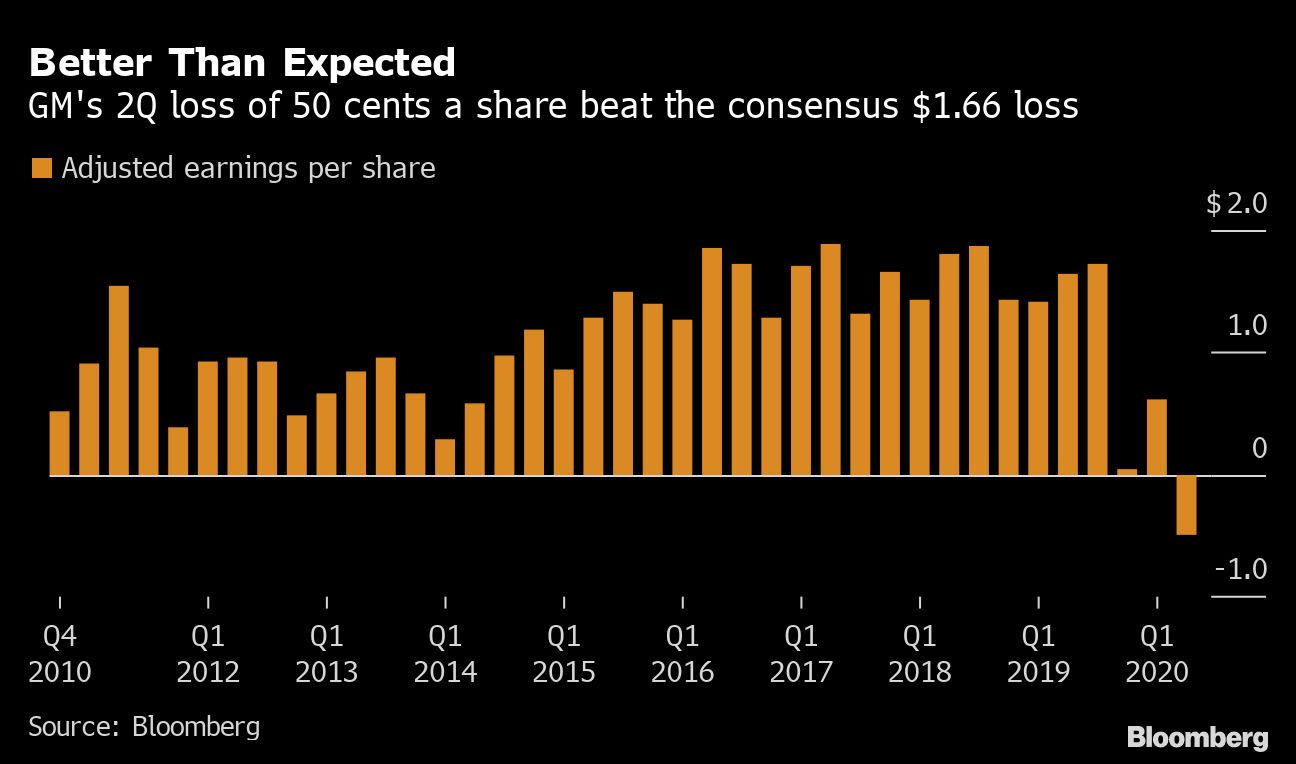 (Bloomberg) — General Motors Co. reported its first quarterly loss since it emerged from bankruptcy but said it sees a path to full-year profit and paying off debt if the economy remains stable during the second half of 2020.

With plants running and customers returning to dealers following closures earlier this year, GM is rebuilding inventory, said Dhivya Suryadevara, the company’s chief financial officer. Barring another economic shutdown from the coronavirus, GM expects to chalk up $4 billion to $5 billion in earnings before interest and taxes for the balance of the year.

“This assumes a stable economy going forward,” Suryadevara told reporters on a conference call. “This is a scenario, not a guidance, and these factors are inherently difficult to predict.”

The automaker said Wednesday it lost 50 cents a share in the latest three-month period, compared with a consensus forecast for a loss of $1.66 per share. The unexpectedly strong performance underscores the company’s financial resilience in the face of the pandemic in the U.S. and China — its two biggest markets.

GM’s financial results signal the company may have weathered the worst of the Covid-19 outbreak. Loftier prices for its new large pickup trucks helped offset the springtime pause at its plants and showrooms. Sales climbed in May and June after crashing in April. And the automaker plans to repay by year’s end the $16 billion it borrowed to stay flush.

GM said it burned through $9 billion in cash over the last three months but still has cash on hand totaling $30.6 billion.

The automaker should be able to generate between $7 billion and $9 billion in cash in the second half with a stable economy, Suryadevara said. That would be enough to pay down the entire $16 billion that the company borrowed from a revolving credit line in March, a move triggered by the rapid spread of the coronavirus and its paralyzing impact on vehicle sales.

The bullish profit-recovery expectation comes as GM works to rebuild a depleted inventory of popular and profitable sport utility vehicles and trucks. It ended the quarter with 444,000 vehicles on dealer lots, down from 809,000 a year ago. Suryadevara said the total may recover to about 600,000 vehicles by the end of the year.

Morgan Stanley analyst Adam Jonas said in a research note that GM has pushed some vehicle-development costs into the future, which could have boosted second-quarter results at the expense of third-quarter performance.

“Taking nothing away from 2Q, we believe it may have borrowed a bit from what we and the market expect to be an extremely strong 3Q improvement,” Jonas wrote.

In the U.S., GM’s vehicle sales fell 34% in the second quarter, but demand for its profitable pickups mitigated the blow. With its full-size truck plants running on three shifts, the company expects to show better financial numbers for the full year. In another positive sign, GM said it will boost pickup production at its plant in Fort Wayne, Indiana, by 1,000 trucks a month.

GM’s sales in China declined only 5% in the latest three-month period, and it turned a $169 million profit after losing money in the first quarter. Suryadevara said Chinese demand for new SUVs and the Cadillac CT4 sedan is helping its results in that market.

“In the second quarter, we’ve seen a nice recovery” in China, she said.

The problem for GM, Jonas said, is that investors don’t seem to take notice of its earnings power and bold electrification plans. On a call for analysts, he asked GM Chief Executive Officer Mary Barra how she can get investors to see that GM shares are worth buying when so much interest is being given to Tesla Inc. and a slew of unproven EV startups.

To make a case that GM has electric-vehicle chops, Barra affirmed the Cadillac Lyriq is on schedule for a 2021 launch and the GMC Hummer EV is also on track for 2022. She pointed out GM has greater production capacity and scale than any electric-car venture.

“As we move forward, people will see all the strength we bring as it relates to scale manufacturing capability,” Barra said. “So we’ve got to keep telling our story. We’ve got to deliver and that’s exactly what we intend to do.”