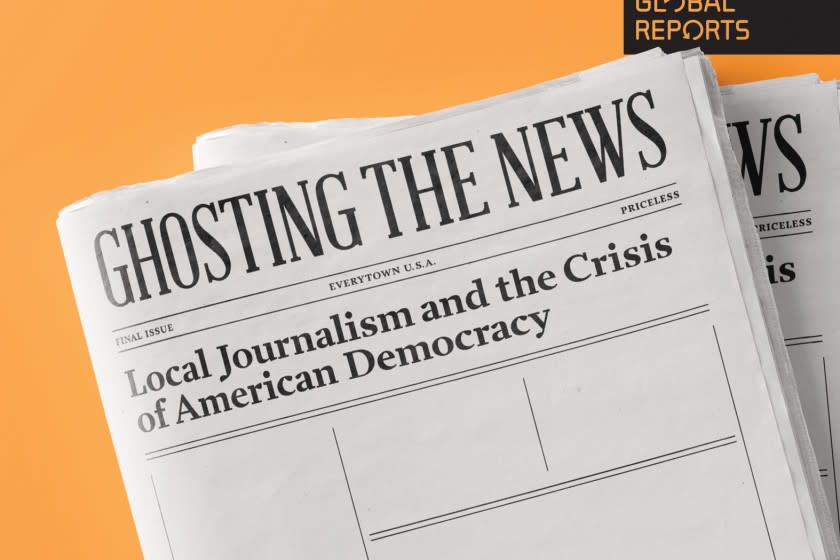 For two days in the middle of February, before any of us knew how bad the pandemic would get, I served as a juror for the Pulitzer Prizes in the local news category.

Our jury combed through submissions chronicling pressing societal problems. We learned about a corruption scheme that brought down the mayor of Baltimore; the failure of Boston’s public schools to prepare even the most motivated students for the workforce; and sexual abuse within Mennonite communities outside of Pittsburgh.

Here’s what I’m sad to admit: Even as an avid news consumer, glued to my smartphone, I had encountered few of these stories before. Aside from the Los Angeles Times, my news diet consists mostly of national and international news. In 2020, Trump’s fourth year in office, a year dominated by the coronavirus, social unrest and economic calamity, what else is there to pay attention to?

A lot, it turns out.

Local news isn’t isolated or small; it’s where themes of historic significance play out in people’s lives. Unfortunately, there are fewer and fewer journalists to chronicle it — to cover the myriad local governments, school boards and water districts that carry out the mundane but critical work of our democracy.

More than 2,000 papers have stopped publishing since 2004. Newspaper companies cut 45% of their newsroom jobs between 2008 and 2017. This year alone, thousands of media positions have been eliminated as the pandemic eviscerated what was left of the advertising that once sustained newspapers and magazines.

The decline of local news is no surprise to any journalist and certainly not to Margaret Sullivan, the media columnist for the Washington Post and author of an important new book, “Ghosting the News: Local Journalism and the Crisis of American Democracy.” What’s surprising, Sullivan notes, is that this crisis is unfamiliar to most Americans. Last year, a Pew Research Center survey found that 71% of Americans believed local news was doing well financially. Perhaps it wasn’t on their minds at all: Fewer than one in six Americans subscribes to a local newspaper, whether in print or digital form.

Sullivan is the perfect person to diagnose the problem. She worked her way up from summer intern to top editor of her hometown paper, the Buffalo News, a job she held for 13 years, overseeing a newsroom of 200 (now less than half that size).

After 32 years in Buffalo, Sullivan moved to the New York Times as the public editor, representing readers as a sort of ombudsman. (We overlapped at the Times but crossed paths on only a few occasions.) At the Post, she is a voice of conscience, raising profound questions about false equivalence (“both sides” journalism), evolving notions of journalistic responsibility and how to deal with Trump’s domination of the news cycle.

For this book, Sullivan crisscrossed the nation, reporting from the ground up. She starts with her alma mater, the Buffalo News, which for decades had the good fortune of being owned by the investor Warren Buffett. The company used to return healthy profits, but then classified advertising migrated to Craigslist, display ads moved to Google and Facebook, and readers shifted from print to desktops and then mobile devices. In 2018, the Buffalo News lost money for the first time in decades; in 2019, Buffett said newspapers “were toast”; this year, the paper was sold.

All across America, “news deserts” are sprouting up, as documented in a landmark 2018 report by Penelope Muse Abernathy of the University of North Carolina. Many other communities are left with “ghost newspapers,” vestiges of the publications they once were, with skeletal staff and next to no original reporting.

The consequences are dire. Communities without strong local news have lower trust in institutions and higher political polarization; they even have higher municipal borrowing costs, because there is no watchdog to ensure taxpayer dollars aren’t being wasted. Instead of verified facts, people rely more on gossip, talk radio, social media and cable news.

As Sullivan writes, it’s not just the watchdog function that matters: “It’s the way a local columnist can express a community’s frustration or triumph, the way the local music critic can review a concert, the deeply reported feature stories, the assessment of a new restaurant, the obituaries, the letters to the editor. The newspaper ties a region together, helps it make sense of itself … serves as a village square whose boundaries transcend Facebook’s filter bubble.”

The world isn’t standing still as newspapers die. In college towns, student newspapers have risen to fill in the gaps. Citizen-led hyperlocal sites have sprouted up in unexpected places like East Lansing, Mich., and Tyler, Texas. Report for America, a nonprofit group modeled on the Peace Corps, has dispatched young journalists around the country.

Perhaps the most promising development has been the flowering of nonprofit newsrooms like ProPublica and Texas Tribune. The listener-supported model has been a mainstay of public radio, and stations like KQED are helping to water the news deserts. Offering yet another path forward, at least three legacy newspapers — the Salt Lake Tribune, the Philadelphia Inquirer and the Tampa Bay Times — are either nonprofit-owned or nonprofits themselves.

The problem is that this is a race against time. Google and Facebook, which enjoy a duopoly over digital advertising, are starting to throw money toward journalism philanthropy, but it’s not enough. More and more newspapers are being acquired by private equity funds with short-term time horizons; McClatchy, a family-controlled newspaper chain that owns the Sacramento Bee, appears to be headed toward control by a hedge fund.

Locally owned papers — the Boston Globe, the Seattle Times, the Los Angeles Times, the Minneapolis Star-Tribune — could have promising futures, thanks to renewed civic interest and generous stewards. But it’s a tough road; the internet rewards scale, and the New York Times, the Washington Post and the Wall Street Journal have vastly more digital subscriptions than all other American newspapers combined.

Sullivan’s book ends on a bleak note: “The loss of local news will continue, especially in the rural or remote areas that the newer efforts are unlikely to reach. The damage done by those losses will accelerate. American politics will become even more polarized; government and business corruption will flourish; the glue that holds communities together will weaken.”

Call it a leap of irrational faith, but I think the prognosis is premature. Policy makers can lend a hand. Regulators in France and Australia have demanded that Facebook and Google pay publishers for content surfaced on their platforms; that would be a sea change if it happened here. Congress should consider amending federal bankruptcy laws to favor community interests when newspapers are sold; it could also provide no- or low-interest loans for news startups. The remit of the Corporation for Public Broadcasting, which supports public television and radio, could be expanded to include local digital news sites.

Ultimately, Sullivan’s pessimism about local journalism is as much a verdict on our culture as anything — and can you blame her? Journalists have been attacked as “enemies of the people,” body-slammed, tear-gassed and worse. Yet most Americans still say they trust local news. If we are going to rebuild trust in journalism, it will have to happen from the ground up, as part of a broader renewal of our civic institutions.

There is a lot to fix in the country, and local news is no small part of it. We would do well to recall Thomas Jefferson’s warning in 1787, the year the Constitution was ratified: “were it left to me to decide whether we should have a government without newspapers, or newspapers without a government, I should not hesitate a moment to prefer the latter.”

Chan, the editorial page editor at the Los Angeles Times, has been a newspaper journalist for 20 years.