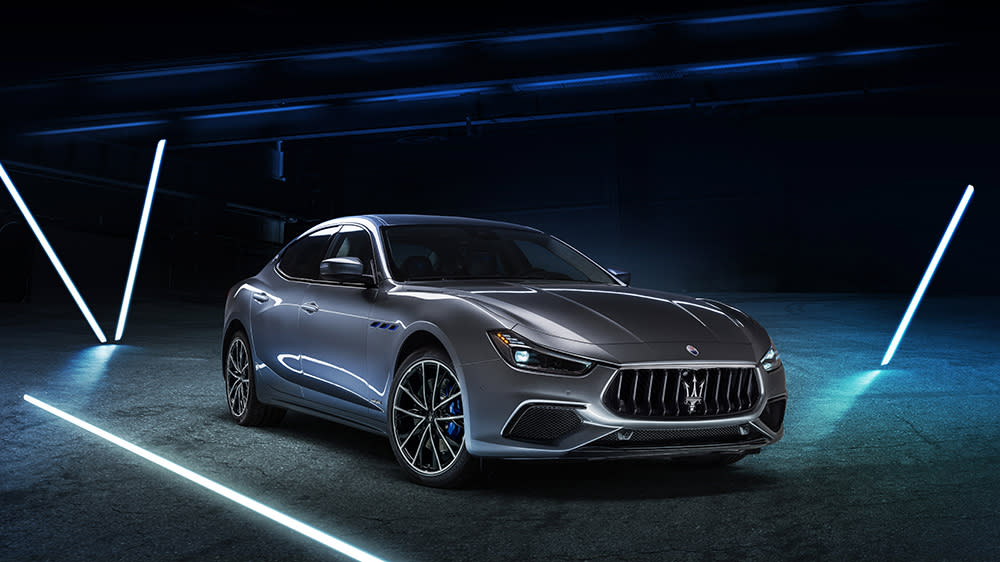 After a hundred years, Maserati is switching gears. The storied Italian marque unveiled its first electric car on Thursday and kick-started its green agenda.

The Maserati Ghibli Hybrid is a buzzing new riff on the classic sports sedan that was first introduced to the public as concept at the Shanghai Motor Show in 2013. Now a reality, the next-gen model has been treated to a minor facelift and fitted with a hybrid powertrain.

The setup sees a turbocharged 2.0-liter four-cylinder engine paired with a 48-volt alternator and a small battery that’s mounted at the back. Combined, this produces 330 hp and 332 ft lbs of torque, which will launch the Ghibli Hybrid from 0 to 62 mph in 5.7 seconds and allow it to reach a top speed of 158 mph.

While its petrol-only predecessor had 345 horses thanks to its twin-turbo 3.0-liter V6, Ghibli 2.0 promises to be more fuel-efficient and better to the Earth. In fact, it will emit 25 percent less CO2 than its counterpart and it’s also 176 pounds lighter. Still, the automaker has ensured that the car will have that renowned Maserati roar.

Looks-wise, it’s not a drastic departure from the OG Ghibli, but it feels fresher. The rear end features revamped, boomerang-shape taillights inspired by the 3200 GT and Alfieri concept, while the front received an updated grille and new headlights.

Maserati selected blue to represent its eco-friendly electric cars moving forward, and the hue can be found on the exterior accents, including the air ducts, brake calipers and the logo on the rear pillar. The color is also used in the interior where blue seams are juxtaposed with black leather trim.

The infotainment system has also been treated to a modern revamp. The screen has grown in size to 10.1 inches and now runs on the latest Android Automotive operating system. The old-school analog gauges have been replaced by fully digital alternatives.

The Ghibli Hybrid may not be the boldest EV design on the market, but it’s a major milestone for Maserati—one that presages the marque’s future. Next year, the automaker is planning to deliver two new EVs, the GranTurismo and GranCabrio. The MC20 sports car is also scheduled to debut later this year and will likely include hybrid and electric variants.

Unfortunately, we won’t see the Maserati Ghibli Hybrid in the US, but production is due to start in the second half of this year, and it will hit other markets by the end of the year. And who knows—if the model is wildly successful in Europe, maybe America will get its own edition one day.

Check out more photos of the Maserati Ghibli Hybrid below: