Samsung Faces a Darwinian Moment in Its Biggest Business 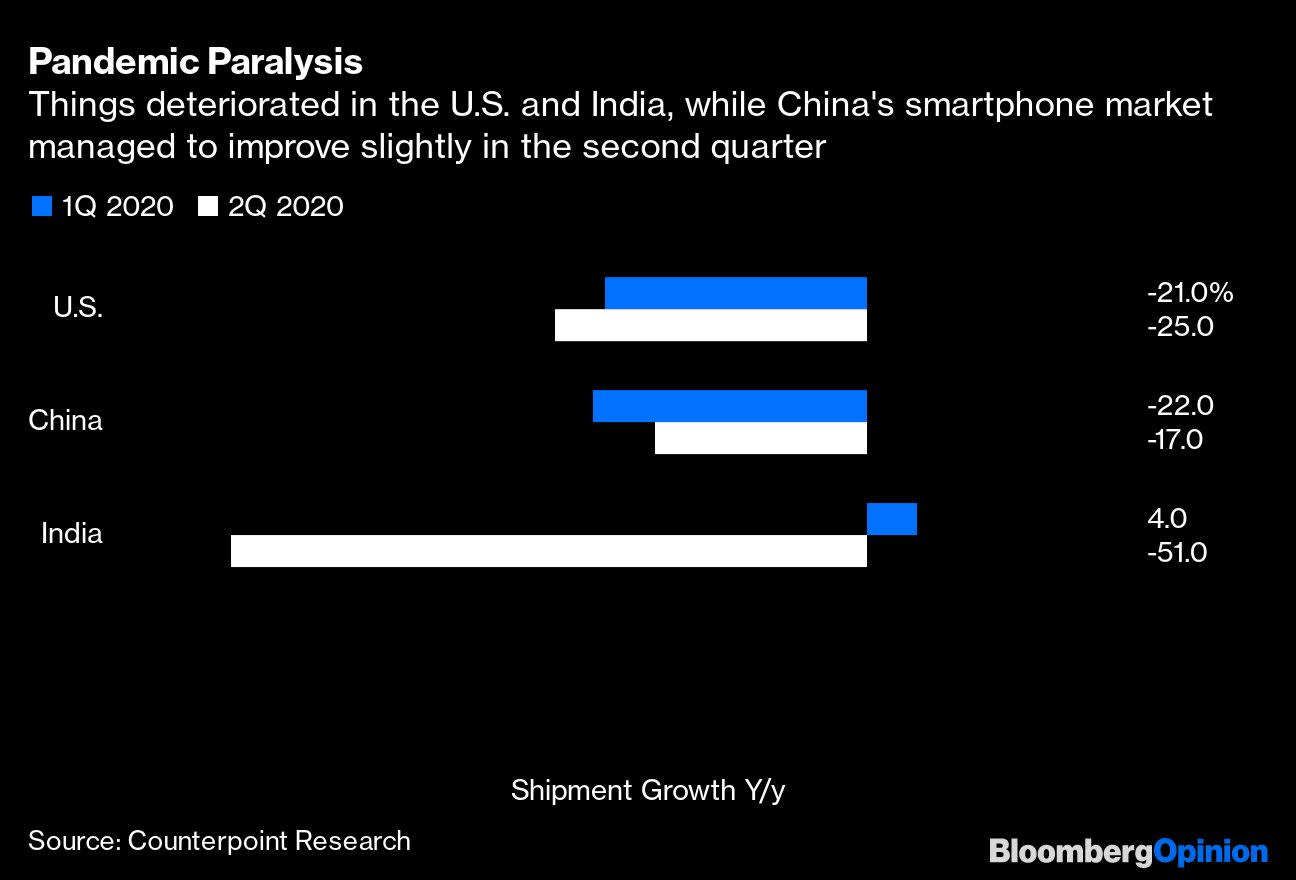 (Bloomberg Opinion) — Charles Darwin’s theory of evolution is often misunderstood to posit that only the strong survive.

With Covid-19 decimating the global economy and crimping consumer spending power, Samsung Electronics Co. did well last quarter remembering what the 19th century biologist actually expounded: Those most adaptable to change have a better chance.

Samsung has battled through the crisis thanks to its strength in electronic components, notably memory chips. Yet smartphones are the South Korean company’s biggest revenue contributor. A lot of the components the firm makes end up in devices bearing its own name.

With the consumer economy in tatters and gadget sales plummeting, the smartphone division threatened to undermine the strength that Samsung found in shipping memory chips used in servers — a big beneficiary of streaming content and work-from-home services during the pandemic.

Revenue at the smartphone unit plummeted 18% for the period, the single largest contributor to a 6% decline in overall sales, it said in its earnings statement Thursday. That shrank the division’s contribution to just 37% of the total, though it still remains the biggest component of the company’s $43 billion in quarterly revenue.

Samsung isn’t alone. Global smartphone shipments dropped 12% in the first quarter, and there’s little expectation that we’ll see sustained growth for a while yet.(1)

Counter-intuitively, Samsung’s devices business posted a 25% rise in operating profit from a year earlier, albeit 26% lower than the prior quarter. That’s because rather than being burdened by the huge overheads of running a $90 billion-a-year handset business, management acted quickly to cut costs at its smartphone unit. Marketing and offline promotions were hit, while sales shifted online.

An interesting divergence in the data starting early in the Covid-19 crisis provide clues as to how Samsung and rivals like Apple Inc. and Huawei Technologies Co. should approach the rest of 2020.

While Samsung’s smartphone revenue fell a single-digit amount in the first quarter, shipments dropped by 19%, according to Bloomberg Intelligence. The discrepancy lies in squeezing out a higher average selling price by driving high-end models. Apple and Huawei, on the other hand, saw prices and shipments decline by a smaller scale. It seems that Samsung repeated this trick in the second quarter.

Through the rest of the year, regional differences in how the pandemic plays out is where adaptability will be more important than pure size. In China, for example, the situation marginally improved in the second quarter, with the scale of shipment declines narrowing from the prior period as the outbreak eased and life returned to relative normalcy.

India, by contrast, managed to squeeze out growth in the first three months and then plummeted 51% in the June quarter as the nation went into a prolonged lockdown, according to data from Counterpoint Research. And in the U.S, a 21% drop from the previous year worsened to a fall of 25%, matching the general consistency of economic malaise since the start of the crisis.

As the only smartphone brand with a strong presence in each major region, Samsung’s ability to keep growing — or at least stem the slide — will depend on its ability to quickly shift its marketing and distribution focus. Rivals have less room to maneuver: Apple gets two-thirds of its revenue from Europe and the Americas, while Huawei is king of Asia and developing Europe.

Samsung’s need to shift strategy applies not only to geography, but sales channels and revenue models. The company is considering a deal that would give Alphabet Inc.’s Google more access, such as promoting Google’s digital assistant and Play Store on its devices, in return for revenue from the U.S. search engine giant, Bloomberg News reported yesterday.

It’s also looking to adjust marketing and shipment of handsets. In the U.S, where telecom operators remain the largest purchase point for smartphones, lockdowns and social distancing left stores either closed or largely empty. As a result, the share of devices sold online doubled to 31% during the second quarter, according to Counterpoint, helping Samsung limit its slide in U.S. shipments to just 10%, half the scale of the wider market.

This picture may well change. A new outbreak in Hong Kong, where once the virus seemed under control, reminds us that the situation anywhere can deteriorate quickly. China’s ability to keep things under control after the initial outbreak shows that there’s always the potential for improvement.

Samsung can’t control the dynamics of the pandemic, but its prospects will depend how well it adapts.

(1) The exact scale of the decline differs by research firms, but there’s general consensus about the scope and outlook.