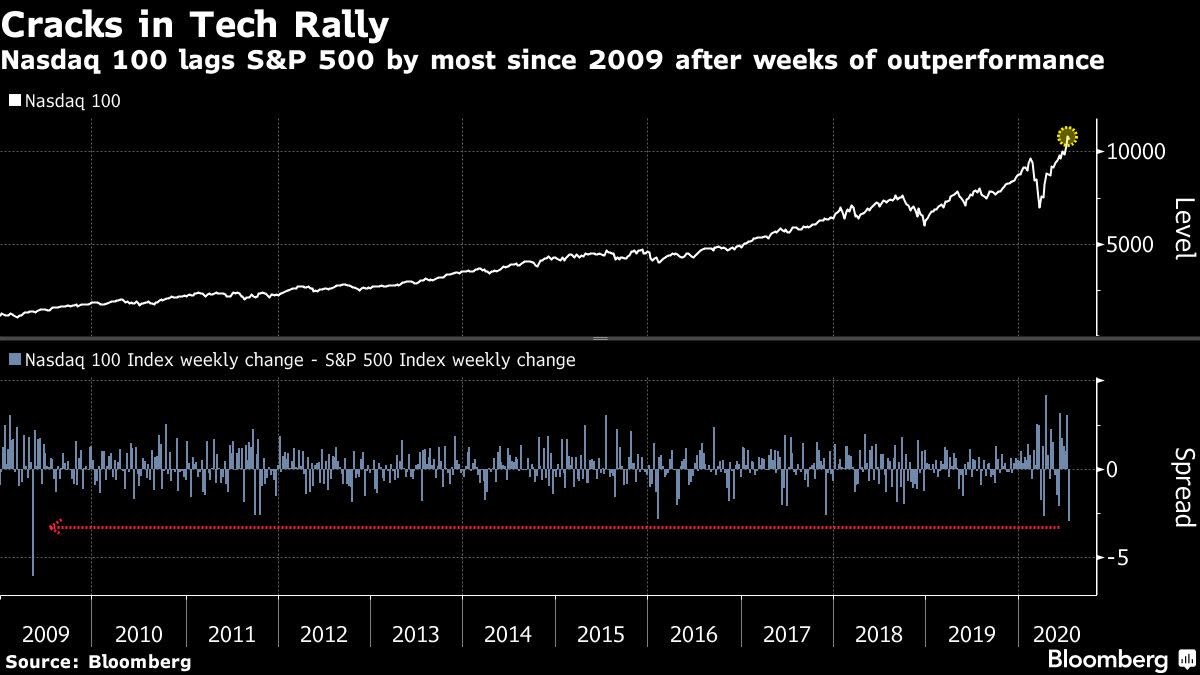 (Bloomberg) — The stay-at-home trade just got kicked to the curb.

At least for a week, anyway. Down 5.5%, the Fang bloc — Facebook Inc., Amazon.com Inc., Netflix Inc. and Google’s parent Alphabet Inc. — suffered its worst drop since March. As hopes for an economic rebound bubbled back up, money darted to cyclical stocks, a once-ignored corner of the market. As a result, the tech-heavy Nasdaq 100 trailed the S&P 500 by the most since 2009.

Strange as it sounds, it’s been that — speculation the economy will shake off the Covid crisis — that has most often threatened tech’s preeminence in 2020. Positive data on a potential vaccine raised those odds in investor minds, making stocks optimized for a lockdown seem less precious. While the Nasdaq eked out a gain Friday, it came after Netflix reminded bulls that as fast as tech earnings have expanded, they are not limitless.

“They can continue to grow, but not at the kinds of levels that sustain their valuations,” Lori Heinel, deputy global chief investment officer at State Street Global Advisors, said by phone. “Investors have been willing to just continue to pay for that more durable, relatively high-growth set of securities. I think they are going to start to pay attention to the details.”

The Nasdaq 100 slipped 1.8% this week, compared with a 1.3% advance for the S&P 500. The Dow Jones Industrial Average climbed 2.3% over the stretch, bolstered by gains in commodity and industrial shares.

Despite the setback, the Nasdaq 100 is still poised to beat the S&P 500 for a 10th consecutive month, the longest winning stretch in 20 years. And tech stocks in the S&P 500 are beating energy shares by 55 percentage points, the widest gap between the best and worst groups at this point in a year since at least 1990.

Which is to say, Wall Street’s obsession with the fortress-like profit potential of internet and software stocks remains intact. But there are signs the devotion is wavering. Commodity, industrial and small-cap stocks jumped this week as news broke that Moderna Inc.’s Covid-19 vaccine produced antibodies in all patients tested in a safety trial. The Russell 2000 posted its second-best week relative to the Nasdaq 100 going back to 2016.

“Perhaps some of these tech stocks were getting a little ahead of themselves — as far as equity markets versus the data showing where the recovery is heading,” said Chris Gaffney, president of world markets at TIAA Bank. “We definitely could continue to see that rotation.”

Doubts over the Nasdaq 100’s momentum are building. Based on analysts’ share-price targets, the benchmark index will be flat over the next 12 months. In the latest Bank of America survey of money managers, a record 74% of respondents viewed long tech stocks as the most crowded trade.

But anyone on the lookout for a 2000-style crash should be aware: tech shares’ current valuations pale in comparison to dot-com days. While obviously far from cheap at 25 times forecast profits, it’s less than half the levels seen at the internet bubble peak. In a quarter where S&P 500 firms are forecast to see a plunge in profits, total net income in the Nasdaq 100 probably rose 1%, analyst estimates compiled by Bloomberg show.

“It’s this funny circumstance where you’re looking at tech companies and you see these high valuations and you say, ‘Oh, perhaps that’s a bubble,”’ said Lauren Goodwin, economist and multi-asset portfolio strategist at New York Life Investments. “For many of the fundamentals of the companies, that’s not necessarily true. Their valuations are high but there are fundamental reasons for it.”