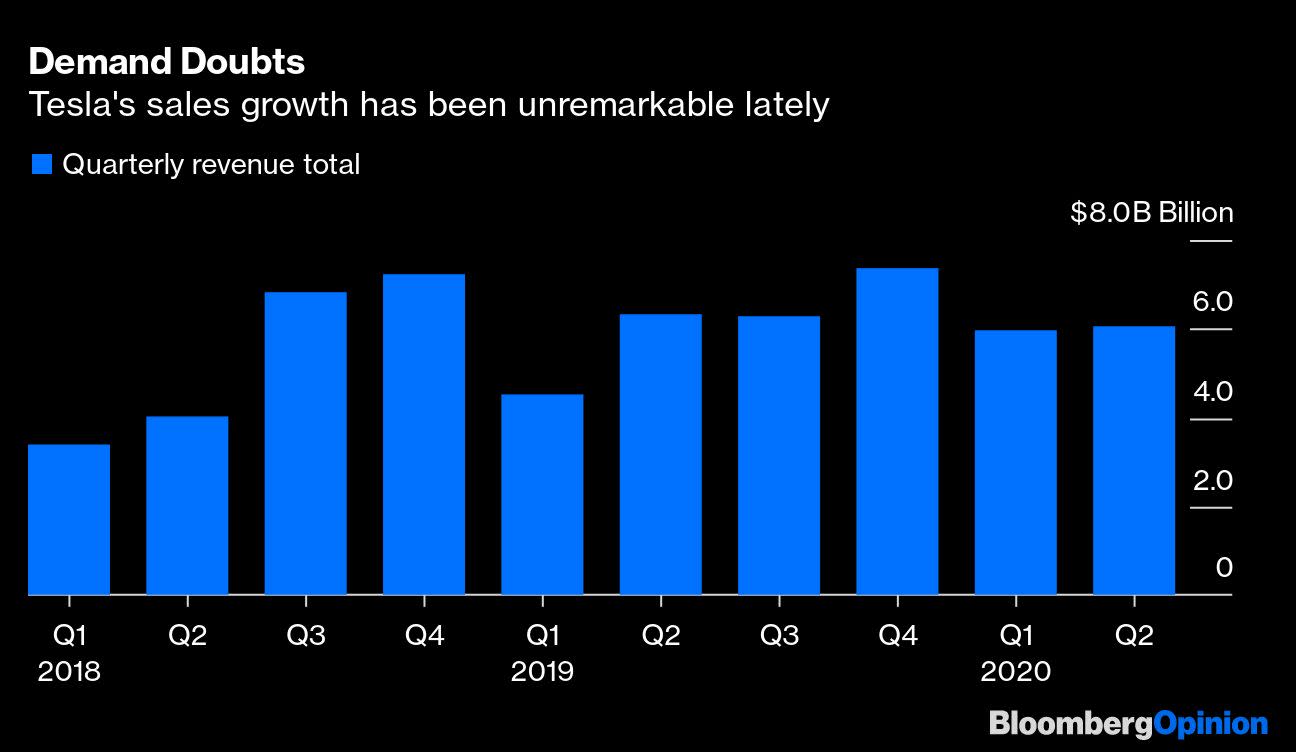 (Bloomberg Opinion) — You know Tesla Inc. is maturing as a carmaker when it manages to be slightly dull. Wednesday evening’s earnings update was even more eagerly anticipated than usual after the recent surge in its share price. Elon Musk’s company has added an astonishing $200 billion to its already ample market capitalization since the end of March.

Confirmation that Tesla will add a second U.S. factory, in Austin, Texas, is certainly something to celebrate — especially for the workers it will employ there to build its Cybertruck and other products. So too is a fourth consecutive quarter of net profit, which may prompt the company’s inclusion in the S&P500.

And yet the earnings call — where Musk has in the past ranted about “fascist” virus lockdowns and attacked analysts for asking “boring, bonehead” questions — was a bit of a snooze. It even featured a long discussion about insurance and Musk’s appreciation for the actuarial profession.

In the current economic environment, such steadiness is an achievement. Most car companies will probably suffer huge losses because of the recent closures of factories and showrooms, even if things won’t be quite as bad as feared initially. By contrast, Tesla reported $104 million of net income in the April to June period, bringing its total profit over the past four quarters to $368 million.

Still, these are modest amounts for a company that’s valued at an inexplicable 800 times trailing earnings, giving it a $295 billion market capitalization.

The profits are also more than accounted for by $1 billion of regulatory credits that Tesla sold to other carmakers during the 12 months to June, including $428 million in the latest quarter. It’s only able to earn this income because rivals haven’t gotten their act together yet on building enough electric vehicles and have to buy credits from Musk’s company to satisfy emissions regulators. Tesla acknowledges this good fortune won’t last forever.

At a time when Musk is building three new factories on three continents, money from any source is welcome. Tesla says its $8.6 billion pile of cash and equivalents is sufficient to fund its expansion. But raising capital would barely dilute shareholders given how inflated the stock is. Investors might even welcome it.

The second-quarter earnings won’t, however, settle the debate about whether demand for Tesla cars is starting to tail off in important markets. While Musk says this isn’t a problem, the company has been cutting prices in North America and China. His explanation is that the cheaper the cars are, the more people will buy them. So long as the company remains “slightly profitable” and avoids going “bankrupt” — in his words — then he sounds happy to sacrifice a bit of profit margin to drive growth.

Tesla isn’t growing all that much right now, which is hard to square with the massive jump in its share price. Revenue declined 5% year on year in the latest quarter. The pandemic will have taken a toll, but Tesla will only really start to merit its “Big Tech” valuation once its top line starts firing again.