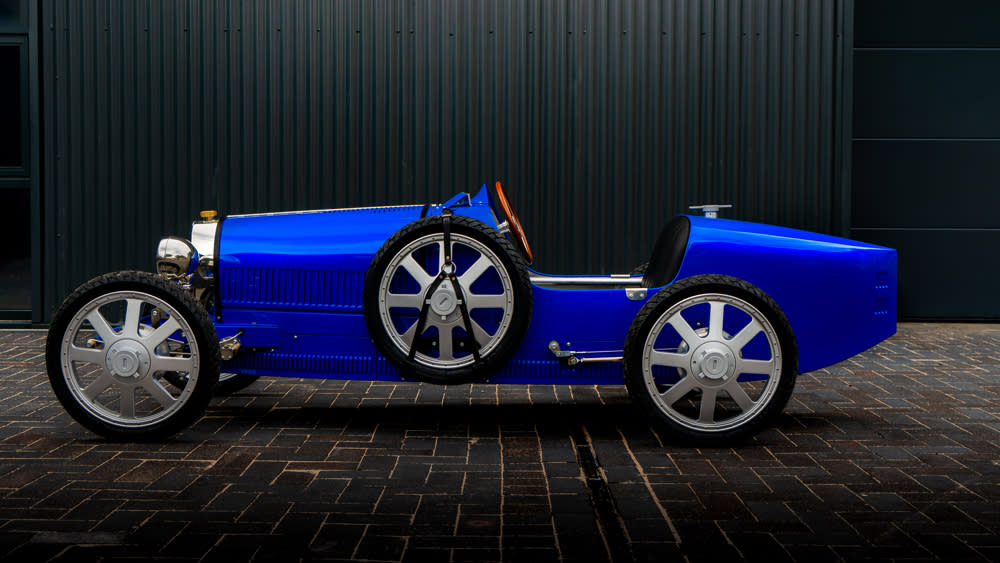 At the 2019 Geneva Motor Show, Bugatti unveiled the Baby II to commemorate the brand’s 110th anniversary. With a production run limited to 500 units, the model was sold out within 3 weeks. And then 2020 happened, which led to a few clients having to cancel their reservations. That’s great news if you had your eye on one of these but were too slow on the trigger last year. Aren’t second chances great?

The Bugatti Baby II is the reincarnation of the original Bugatti Baby, of which 500 were produced from 1927 to 1936. But the scaled-down version of the iconic Type 35 race car wasn’t initially intended for series production. In 1926, Ettore Bugatti and his son Jean built the miniature Lyon GP racer for Ettore’s youngest son, Roland, to celebrate his fourth birthday. Eventually, Bugatti customers caught wind of the Baby and went gaga over it, which led to the car’s nine-year production run.

The original Baby, known internally as the Type 52, was a half-scale model, which prohibited children older than about eight years of age from fitting inside. Today’s Baby II is now 3/4-scale, allowing enough space for children 14 years and up. Not only is the new Baby larger than the original, but it’s also more powerful.

The base model, starting around $35,000, is powered by a 1.4 kWh lithium-ion battery pack. In its Novice drive mode, the composite-bodied car is good for 1.3 hp and a top speed of 12 mph, which should help the mini machine reach its maximum 15.5-mile range. Dial up Expert mode, and you get 5.4 hp, which is enough for 30 mph flat out.

The carbon-fiber Vitesse variant, priced at $50,700, uses a 2.8 kWh battery pack good for up to 13.4 hp and 31 miles of range. The Vitesse still offers Novice and Expert drive modes, but a Chiron-inspired Speed Key unleashes the ability to reach 42 mph. Rounding out the lineup is the top-tier Pur Sang model costing $68,190. It features the Vitesse’s extra performance, but also boasts a hand-formed aluminum body that takes more than 200 hours to craft.

Regardless of spec, all versions weigh a bit more than 500 pounds and feature rear-wheel drive, a limited-slip differential, hydraulic regenerative brakes, LED headlights, a quick-release steering wheel, adjustable pedals and even adjustable suspension dampers. In addition, the battery packs can be swapped out in seconds for extended drive time.

Unlike the original, the Baby II isn’t built in-house by Bugatti, but rather in collaboration with The Little Car Company. That said, quality and attention to detail appear to be up to Bugatti standards. Even the marque’s Le Mans–winning test pilot, Andy Wallace, played a role in the vehicle’s final development. If you’re a serious car collector, this baby’s hard to pass up.