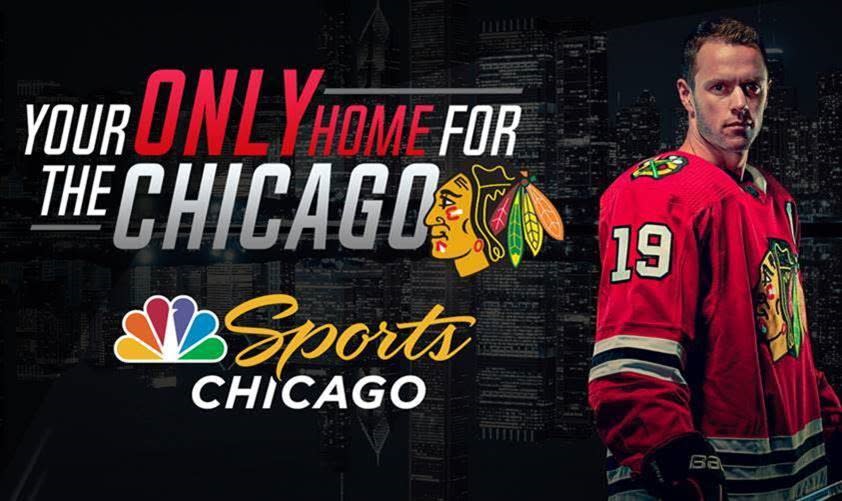 Chicago, IL (July 27, 2020) – NBC Sports Chicago – THE ONLY HOME for the CHICAGO BLACKHAWKS – has announced its Blackhawks return-to-play coverage details featuring live game coverage of the team’s Stanley Cup Qualifying Round against the Edmonton Oilers, an exhibition match-up against the defending Stanley Cup champion St. Louis Blues, live streaming of EVERY GAME and surrounding game coverage to authenticated subscribers via NBCSportsChicago.com and the “MyTeams by NBC Sports” app, plus – a BRAND NEW STUDIO for Blackhawks Pre/Postgame Live, along with enhanced Blackhawks multiplatform content offerings and much more. (NOTE: Fans located anywhere in the U.S. can download MyTeams for free on iOS and Android devices in the Apple App Store and Google Play Store.)

NBC Sports Chicago will carry the Blackhawks return to on-ice game action with an exhibition match on Wednesday, July 29 at 5:30 PM CT on NBC Sports Chicago+ (NBCSCH+), as the Blackhawks face-off against the defending Stanley Cup champion and longtime division rival St. Louis Blues (also streaming live to authenticated NBC Sports Chicago subscribers via the “MyTeams by NBC Sports” app and NBCSportsChicago.com/BlackhawksStream). The exhibition game, along with all Stanley Cup Qualifying and Playoff games featuring the Blackhawks, will take place at Rogers Place in Edmonton, Alta. and will be delivered to NBC Sports Chicago via a world feed.  The Hall of Fame tandem of Pat Foley and Eddie Olczyk are scheduled to provide the call of all NBC Sports Chicago telecasts.  Foley will be providing the play-by-play call from the United Center, while Olczyk will deliver his expert game analysis from NBC Sports’ International Broadcast Center in Stamford, Conn.

Prior to Wednesday’s exhibition game telecast, fans can look forward to The Return: Blackhawks presented by ChevyDrivesChicago.com at 5:00 PM on NBC Sports Chicago+. This half-hour special, hosted by NBC Sports Chicago’s veteran Blackhawks expert Pat Boyle (@BoyleNBCS) and former Blackhawks defensive standout Steve Konroyd (@Stevekonroyd), will provide fans with a review of the 2019-20 campaign prior to the league pausing the season on March 12, along with a detailed analysis of their upcoming Stanley Cup Qualifying Round series and discussion surrounding how players will have to adapt to living, practicing and playing games in the “bubble.”

From an audio content standpoint, NBC Sports Chicago delivers the popular “Blackhawks Talk PODCAST.” Hosted by Pat Boyle, along with NBC Sports Chicago’s team of Blackhawks content experts, the “Blackhawks Talk” podcast features in-depth Blackhawks discussion on the hottest topics and breaking news, along with special guest interviews with Blackhawks players/coaches/front office execs and additional NHL experts across the country. Fans can download all of NBC Sports Chicago’s podcasts at NBCSportsChicago.com/podcasts and simply subscribe to them via Apple Podcasts, Google Podcasts, Spotify or Stitcher.  The podcasts can be played on any mobile device, laptop, or desktop computer.

WHITE SOX GAMES ON AUG. 3 & 5 SHIFT TO NBC SPORTS CHICAGO PLUS (NBCSCH+) – Due to Blackhawks Stanley Cup Qualifying Round games airing on the main NBC Sports Chicago channel location, White Sox vs. Milwaukee telecasts on Mon, Aug. 3 & Wed, Aug. 5 will now air on NBC Sports Chicago+ (NBCSCH+).  White Sox coverage on both nights begins at 6:30 PM with White Sox Pregame Live; first pitch at 7:10 PM.  NBCSCH+ telecasts are provided to NBC Sports Chicago affiliates and distributed to viewers when two live events are scheduled simultaneously.  NBCSCH+ is available on Comcast/Xfinity ch. 201 in the Chicago area/South Bend, IN & on Comcast/Xfinity ch. 285 in the Peoria, Springfield, Rockford and Champaign markets, along with being made available in DIRECTV, AT&T U-verse, RCN, and WOW! homes among others; viewers are urged to visit NBCSportsChicago.com’s special “Channel Finder” section (NBCSportsChicago.com/channel-finder) and punch in their zip code for complete channel location details.

ALL TIMES ARE CENTRAL TIME
SCHEDULE SUBJECT TO CHANGE