Intel Corp. researchers this weekend revealed a number of technological innovations and concepts, including packaging improvements that could result in computer chips that are 10 times as powerful as today’s most advanced silicon.

According to the company, its latest research could pave the way for chips with more than a trillion transistors by 2030, significantly extending the concept of Moore’s Law.

The computer chip industry has long adhered to Moore’s Law, which was first conceived by Intel co-founder and former Chief Executive Gordon E. Moore in 1965. The law, more of a choice by chipmakers, states that the number of transistors on a microchip will double every two years as chip making technology advances. As such, we can expect the speed and capability of new computers to increase every two years, while paying less for them.

Moore’s Law proved itself to be true for several decades, but in recent years chipmakers have warned that they’re struggling to keep up with it. Earlier this year, Nvidia CEO Jensen Huang became the latest in a long line of names to insist that Moore’s Law is now dead. However, Intel is refusing to accept defeat.

At the IEEE International Electron Devices Meeting 2022 on Sunday, Intel submitted fresh research highlighting a number of processes, materials and technologies that it plans to leverage to deliver chiplet-based trillion-transistor processors by 2030.

Intel has made such a promise before, and says it’s vital to keep pace with Moore’s Law in order to address the world’s insatiable computing needs. It notes that data consumption and the advance of artificial intelligence has resulted in the need for more computing power than ever before.

Intel’s new transistor and packaging research is focused on a few different areas, including accelerating the performance and efficiency of central processing units. It’s also looking at ways to close the distance between traditional, single-die processors and new chiplet-based designs.

One concept it showcased involves greatly reducing the gaps between chiplets to improve performance, while another shows transistors that can retain their state even after losing power. The research also includes what Intel describes as “stackable memory solutions” that could aid overall chip performance.

Intel’s progress comes in multiple areas. For instance, its latest hybrid bonding research demonstrates a 10-fold improvement over last year’s presentation. Its submissions also include designs that use new materials with a thickness of less than three atoms, and a greater understanding of interface defects that can impact data storage and retrieval.

The new ideas come from Intel’s Components Research and Design Enablement team, which is one of the company’s most important internal research organizations. Its engineers and designers are tasked with inventing and developing new materials and methods that support semiconductor manufacturers in the ongoing quest to shrink computer chip technologies to an atomic scale.

The CR group notably created Intel’s extreme ultraviolet lithography technology, for instance. That has enabled it to continue shrinking node sizes while increasing the performance of its semiconductors. 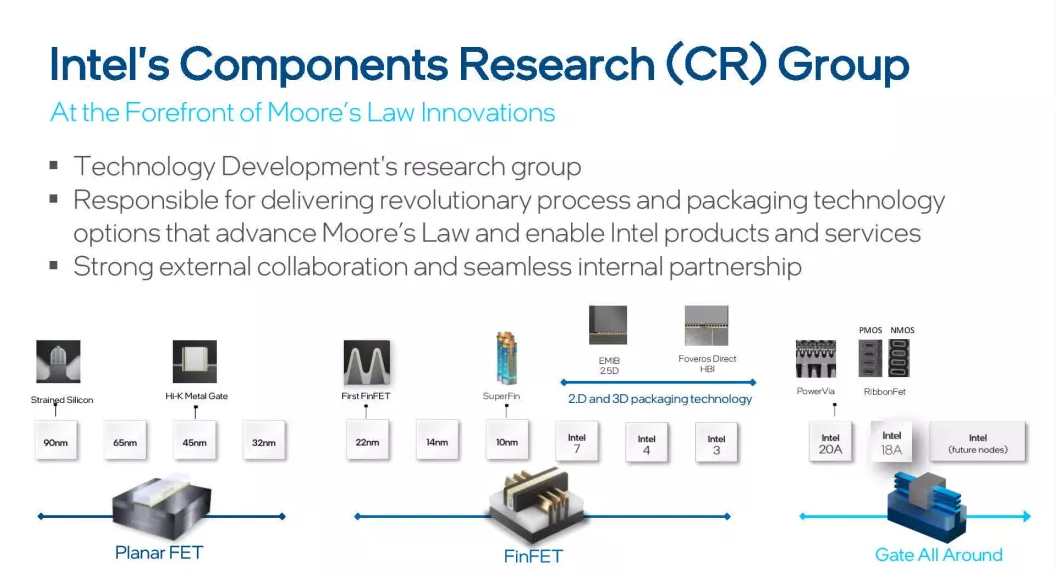 The group’s work is typically five to ten years ahead of commercially available technology, so the techniques and processes it’s working on today could well meet the 2030 target.

“Seventy-five years since the invention of the transistor, innovation driving Moore’s Law continues to address the world’s exponentially increasing demand for computing,” said Gary Patton, vice president and general manager of the CR group at Intel. “At IEDM 2022, Intel is showcasing both the forward-thinking and concrete research advancements needed to break through current and future barriers, deliver to this insatiable demand, and keep Moore’s Law alive and well for years to come.”