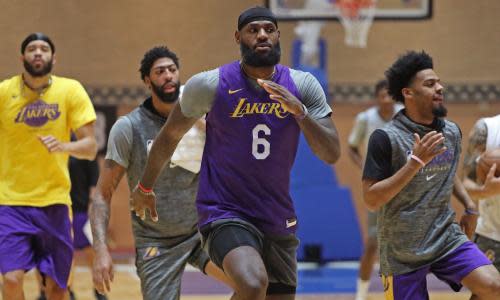 The NBA resumes play after a four-and-a-half-month hiatus on Thursday night as 22 teams pick up their pursuit of a championship inside the bubble at Disney World in Orlando, Florida. Here’s an idea of what to expect from 2020 2.0.

What I’m most looking forward to

Los Angeles Clippers stars Kawhi Leonard and Paul George have had months to rest and prepare for the playoffs, but teammates Montrezl Harrell, Patrick Beverley and Lou Williams have all left the bubble at some point. The Clippers are widely expected to contend for the title, but will they have the same chemistry that they had before the season was interrupted? And how often will they be fully healthy? GB

Related: Snitch hotlines, waffles and lots of ping pong: the strange world of the NBA bubble

This whole pseudo-season is going to be one big basketball experiment, considering it’s all taking place in a single location with at least four and sometimes as many as seven games per day. I’m interested in what sort of effect the lack of a home-court advantage will have on how the postseason plays out. Will lower-seeded underdogs have a slightly better chance? Will it end up even mattering in the slightest? HF

For me, it’s the prospect of watching rookie Zion Williamson blossom from a promising No 1 draft pick into a grown-ass man before our eyes as he attempts to carry the Pelicans into the playoffs after missing the first 44 games of the season while rehabbing from arthroscopic knee surgery. New Orleans may need to win out in order to overtake the Memphis Grizzlies and Portland Trail Blazers for the eighth seed in the West. But Williamson, who turns 21 next week, couldn’t have asked for a more favorable schedule with six of eight games against sub-.500 opponents. BAG

The surprise package will be …

If LeBron James can help turn the ever-unpredictable JR Smith and Dion Waiters into significant playoff contributors, then that will be an incredible surprise. GB

The threat of positive coronavirus tests and the increased likelihood of injuries coming off the break means this: a player you haven’t thought about in years is going to make a gigantic impact for his team. This is a perfect time for a fringe journeyman, a veteran who hasn’t been fantasy-relevant since 2014 or a supposed draft bust to emerge as a difference-maker in this shortened season. HF

The talent-stacked, injury-dogged Philadelphia 76ers were 29-2 at the Wells Fargo Center before the shutdown – the best home record in the NBA – and a lackluster 10-24 on the road. They won’t have any home games in the Orlando bubble, but they won’t be play any true road contests either. With Joel Embiid refreshed and Ben Simmons moving to power forward, Brett Brown’s bipolar bunch will finally realize the potential they’ve heretofore only shown in tantalizing flashes. BAG

Which team benefits the most from the four-month break?

The Toronto Raptors had no reported coronavirus cases and have no significant injuries entering the restart. With the star turn of Pascal Siakam complementing the dependable contributions of Kyle Lowry, Marc Gasol and Fred VanVleet, the defending champions are well positioned to make another deep run. GB

The Los Angeles Lakers. If 2020 hadn’t gone 2020 on all of us, the chances were good that the Lakers would have used the regular season to give LeBron James some time off to preserve him for the playoffs. Well, there’s no need to anymore, as Covid-19 has provided it for him. That’s probably bad news for the rest of the West, because he was already playing like an MVP before the shutdown. HF

Other teams may have gained more in terms of getting wounded players healthy than the LA Lakers, who were cruising with the best record in the Western Conference when the season was suspended. But a four-and-a-half-month break on the doorstep of the playoffs (and a shortened season overall) is a dream scenario for 35-year-old LeBron James, who for years has sought to conserve his energy for the playoffs wherever possible. Same for the team’s other aging contributors like Danny Green and Dwight Howard. With a number of principals heading toward free agency in the summer (er, fall), this could be the Lakers’ best chance at a title. BAG

10/10, relatively speaking. Compared to Major League Baseball’s disastrous plan, it’s been a perfect score. Restarting sports anywhere in the United States is a wild gamble given the national infection rates, and it seems that a rigorously enforced bubble is the only way to make it happen. The most questionable decision thus far is the lenient 10-day quarantine punishment for Clippers guard Lou Williams, who was discovered to have visited an Atlanta strip club on an excused absence for a family member’s funeral. GB

Related: What should we do with racist sports team owners? | Kareem Abdul-Jabbar

5/10. I’m of two minds about this: I personally believe they shouldn’t be playing these games at all, so I’m tempted to give the NBA a one. That said, this is probably the best scenario that they could have drawn up to keep playing, so with that it mind it would be a 10. Let’s do the Solomon thing and split this ranking right down the middle. We’ll give them a five and hope that the bubble doesn’t burst. HF

8/10. It’s a grim state of affairs when a private company, thanks to a shocking abdication of leadership by the federal government, is left to take the lead in the national response to a global pandemic. Lest we forget: it was Adam Silver’s decision to abruptly shut down the season that served as the come-to-Jesus moment for so much of the general US population amid the early denials and prevarications by America’s worst wartime president since Madison. Helped by the relatively scaled-down mechanics of its sport and the resources of parent company Disney, the NBA was first to go public with the isolated campus blueprint that’s been successfully implemented by the National Women’s Soccer League. Armchair chaoticians will argue the Lou Williams imbroglio (and the handful of other hiccups like it) are proof of the unavoidable dangers posed by the human element. But if the show must go on, the NBA appears to have struck on the safest path forward. BAG

The Dallas Mavericks will shock whomever they play in the first round of the playoffs. Luka Dončić and Kristaps Porziņģis weren’t simply leading the league’s No 1 offense before the shutdown; they were leading the most efficient offense in NBA history (at 116.7 points per 100 possessions) according to basketball-reference.com. Rick Carlisle’s team is a bit undermanned entering the restart (regulars Jalen Brunson and Dwight Powell are out for the season), but Dončić and Porziņģis are becoming one of the most formidable duos in the NBA. GB

What the heck: Let’s just say that the New Orleans Pelicans make the postseason. Sure, this means they would have to leapfrog the Grizzlies and Blazers with just eight games to play, but it would be a fun all-around story to see Zion Williamson make the playoffs (and would vindicate this entire restart structure). HF

LA’s longtime afterthoughts won the offseason by adding two superstar wing players in Kawhi Leonard and Paul George, becoming overnight title contenders with the best summer for any NBA team since the Miami Heat signed Chris Bosh and LeBron James in 2010. But after injuries kept them from playing at full strength for most of the pre-lockdown season, the Clippers have been shorthanded for much of their time in Orlando with Patrick Beverley, Montrezl Harrell, Landry Shamet, Lou Williams and Ivica Zubac all outside the bubble for various reasons. Chemistry issues will prove their downfall against the high-upside Houston Rockets in the West semis. BAG

Milwaukee Bucks 4-3 LA Clippers. This is probably the one shot that Milwaukee has to win a title, and they’re featuring the league’s most exciting superstar (Giannis Antetokounmpo) with arguably the best depth in the league. The Lakers and Clippers will be the betting favorites, but Milwaukee has reinforcements that those teams lack. A first NBA title since 1971 is in the offing. GB

LA Lakers 4-2 Milwaukee Bucks. It would just be amusing if, despite all the talk about how unpredictable the restarted NBA season would get, the finals end up featuring the two teams that were on top of their respective conferences before the shutdown. If the bubble holds and the NBA season manages to make it all the way to October, look for LeBron to win a ring with his third different team as he continues his quest to unseat Michael Jordan as the game’s all-time greatest – although his 10-part documentary won’t be quite as much fun. HF

LA Lakers 4-1 Philadelphia 76ers. Bubble weirdness breaks in the Lakers’ favor as LeBron and co win the franchise’s 17th title while sidestepping their two most dangerous threats along the way: the Clippers and the Bucks. The world’s best player, complemented by a healthy Anthony Davis, spins yet another postseason masterpiece in a rematch of the 2001 finals that will arrive at a familiar ending. BAG