New electric Kia spied, looks like the production version of the Imagine Concept 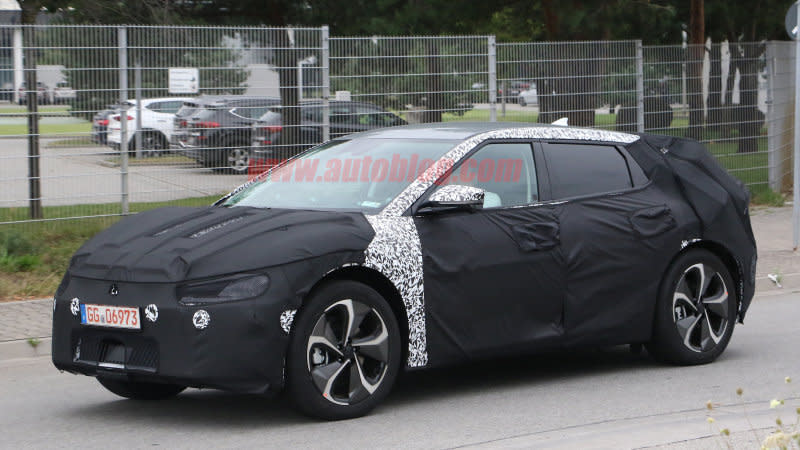 Last we heard, Kia had plans to bring forth a production version of the Kia Imagine Concept vehicle. These spy photos today suggest that the intel was good, and Kia is well on its way to transforming its concept into a production car.

The shape and proportions of the heavily camouflaged car seen in photos here are the two most intriguing elements. From the side, this vehicle looks like a short, lifted wagon. One look at the Imagine Concept is all you need to know where this one is going, though. Its roof slopes further downward the closer you get to the rear of the car, and despite the black tenting, we can still see that it’s going to have a heavily raked rear window like the concept. In a nutshell, the best way we can describe this thing right now is a cross between a wagon and a “crossover coupe.” Kia called the concept a sedan, but the higher-than-normal ride height suggests something in the same vein as the V60 Cross Country.

One other big element in all of this is its powertrain. The Kia Imagine Concept is an electric car, so we can assume that Kia is going to keep the production version of it electric. There’s no sign of an exhaust hanging out under there. It’s a pretty safe bet that this camouflaged tester is electric, which will just add to the legion of electric cars Hyundai and Kia have on the way or at dealerships now. The last new electric car out of Korea that we spied was the 45, which is yet another EV based on a recent concept car.

Assuming the coronavirus didn’t knock the Imagine Concept’s timing too far off track, we expect to see it revealed in full in 2021. The concept was revealed in Geneva, so that would suggest that it’s definitely bound for Europe. However, it’s unclear whether Kia will also sell the vehicle here. With the illusion of it being a crossover, Kia might try its luck. If there are Kias it reminds us of the most, though, it’s the XCeed and ProCeed. Obviously, we don’t get either here, which is a shame because the new ones are rather attractive. We will hopefully have more concrete news on this car in the coming months or in 2021.