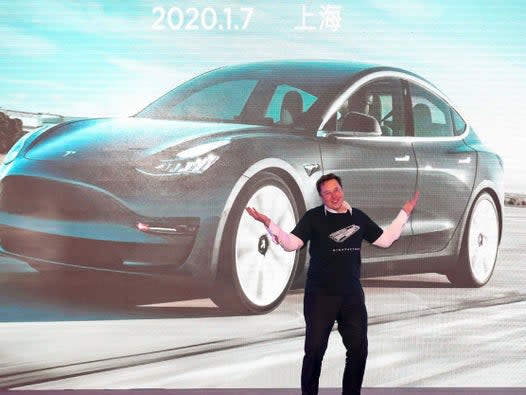 Tesla has posted a second-quarter profit for its fourth quarter in a row, with a net profit of US$104 million (approximately £81.9 million) in the three months to June.

The electric car company, led by entrepreneur Elon Musk, now boasts a market value of around US$300 billion, making it the world’s most valuable auto company despite selling fewer cars than any of its competitors.

Cost-cutting measures and “better-than-expected” deliveries helped the company offset factory shutdowns caused by the coronavirus pandemic. Mr Musk on Tuesday qualified for a massive payout worth US$2.1 billion, his second jackpot since May from Tesla following its huge stock surge.

The car maker’s share price jumped 5 per cent on the profitability news and could earn a spot on the S&P stock market index, the main US equity market benchmark.

“A lot of auto car makers are really struggling with getting their transition from traditional cars to electric cars in place, and Tesla benefits from having everything ready right now,” said the analyst.

“But the valuation difference between Tesla and other car makers, it’s almost ridiculous, so I think [it will be difficult] for the others to catch up.”

Tesla also announced plans to build its second car factory in the US in Austin, Texas. Mr Musk promised the sprawling 2,000 acre site would be an “ecological paradise” on the Colorado River and will produce its CyberTruck and Semi vehicles.

The factory, which will cost US$1.1 billion, would create “at least 5,000 new jobs”, said Texas governor Greg Abbott in a press release.

Mr Musk’s plans to ramp up production were followed by a call for miners to produce more nickel, a key material in the batteries that power Tesla’s electric cars. Nickel makes batteries energy dense so cars can go further on a single charge.

He said on Wednesday: “Tesla will give you a giant contract for a long period of time if you mine nickel efficiently and in an environmentally sensitive way.”