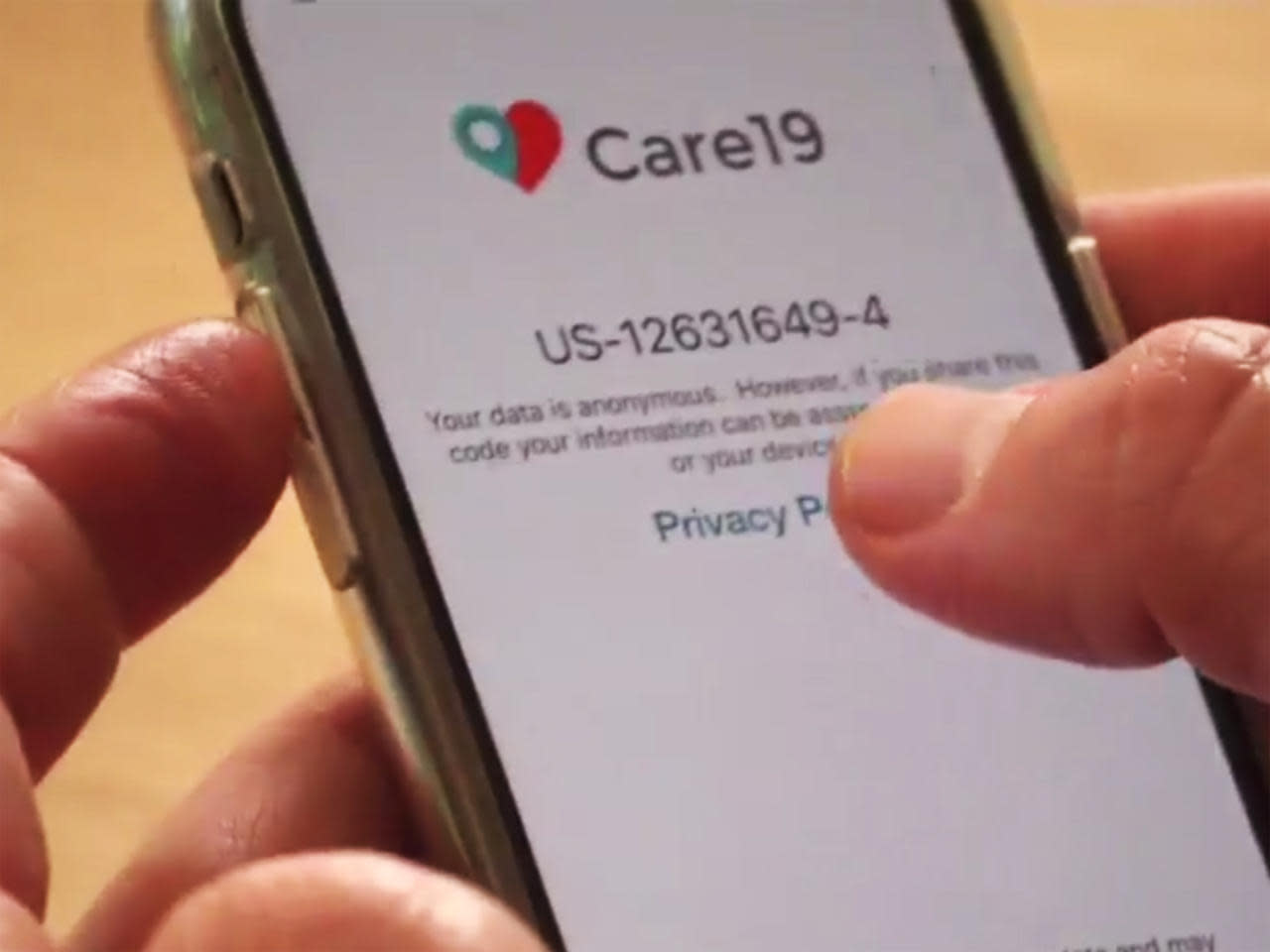 A growing number of public health officials around the country are asking Americans to use smartphones to help stop the coronavirus from spreading. At least 10 states are offering or planning to offer cellphone apps (like Utah’s Healthy Together app) to track people who may have been exposed to the virus, part of a process known as contact tracing.

But privacy is a concern, and so far, getting people to use those apps has been a challenge.

As “CBS This Morning” co-host Tony Dokoupil discovered, many Americans aren’t too fond of being followed around. “How comfortable would you be if I were to give you a tracking device,” he asked Jaime Mendicino, “and monitored your movements throughout the day?”

“Not comfortable at all,” Mendicino replied.

And if it were the government doing the following? “I still wouldn’t feel comfortable,” said Nicole Vallejo.

At least 10 states are now hoping that difference is enough to convince people to download a COVID-19 tracking app, promising to warn people of possible exposures, while guarding their privacy.

“It’s like an insurance policy, right? You hope you never have to use it,” said Vern Dosch, who leads the contact tracing effort in North Dakota.

He said the state’s Care19 app was meant to help with traditional contact tracing. It uses location tracking technology to build a digital log of a person’s movements, which they can then share with investigators, if they choose.

Dosch said, “We knew that basing an app on GPS, there were gonna be a certain percent of the population that was gonna be very leery of that.”

“For the people who are skeptical, what is your promise to the residents of North Dakota about how you’ll protect who they are and where they go?” asked Dokoupil.

“The privacy pledge, Tony, is very straightforward,” he replied. “And that is, that no personal data is shared.”

Since the launch of Care19 in early April, though, fewer than five percent of North Dakota residents have downloaded the app.

Revelations in recent years about tech companies harvesting personal data haven’t helped. “Unfortunately, there have been some bad actors in technology that have damaged the trust that is so critical in the successful deployment of these apps,” Dosch said.

Now, Google and Apple say they may have a solution. They co-developed a tracking technology that’s based not on GPS but on Bluetooth. Users who test positive for COVID-19 can anonymously notify the owners of other phones that have been in close contact, and receive anonymous notifications in turn, all without giving the data to governments or companies.

North Dakota will soon release a second app that incorporates this technology.

Dokoupil asked, “What makes you as a representative of the government of North Dakota comfortable with a private company like Google and Apple building something that’s gonna monitor the movements of your residents?”

“That’s a very good question,” Dosch laughed. “There is a perception that maybe those companies are not to be trusted. But we have worked so closely with them, Tony. We understand how they’re using the technology. They have been extraordinarily diligent. And we really respect that.”

Which states are using iPhone and Android Exposure Notification API?

But it only works if people decide to use it. While some Americans are resigned to being tracked, others are prone to resist.

Daniel Mangeri said, “I think it’s fine, because all the apps we use, like Google Maps, Waze, Snapchat, they’re probably always tracking our information and where we’re going all the time. So, another app really isn’t gonna make a difference.”

Julia Manners, however, said, “In my opinion, I think this particular app – ’cause I’ve been reading about it – is a gateway to a chip they want to put in my arm. And I’m not a conspiracy person …”

“Right, yeah. I think it’s more of a security issue beyond COVID.”

The question is, how many are in the middle, and whether people like Vern Dosch can win them over.

Dokoupil asked him, “What is your message to those people on the fence about downloading an app?”

“We absolutely understand their hesitancy or their reluctance to download the app,” Dosch said. “But in times like this, when lives are at stake, when our ability to open the economy is at stake, every single download matters. It’s a part of our personal responsibility to be able to leverage those technology tools the best we can. And hopefully, we’ll never have to use ’em.”