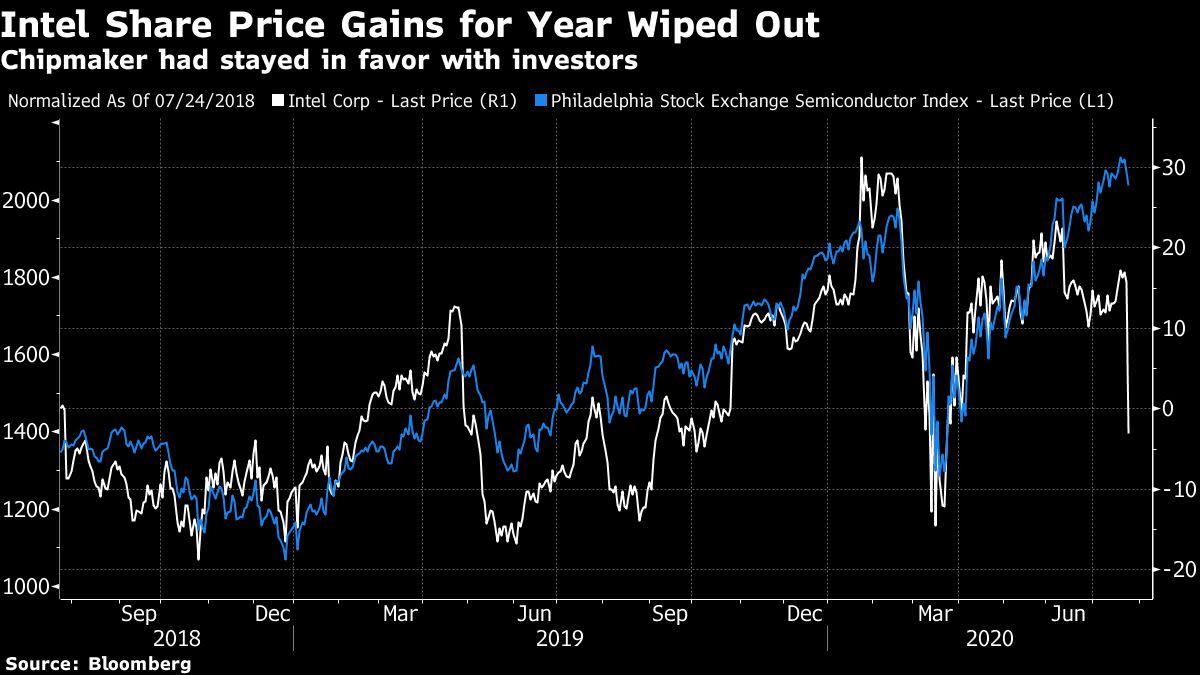 (Bloomberg) — Intel Corp.’s decision to consider outsourcing manufacturing heralds the end of an era in which the company, and the U.S., dominated the semiconductor industry. The move could reverberate well beyond Silicon Valley, influencing global trade and geopolitics.

The Santa Clara, California-based company has been the largest chipmaker for most of the past 30 years by combining the best designs with cutting-edge factories, several of which are still based in the U.S.

Most other U.S. chip companies shut or sold domestic plants years ago, and had other firms make the components, mostly in Asia. Intel held out, arguing that doing both improved each side of its operation and created better semiconductors. That strategy is in tatters now, with the company’s factories struggling to keep up with the latest 7-nanometer production process.

After Chief Executive Officer Bob Swan said Intel is considering outsourcing, the company’s shares slumped 16% on Friday, the most since March, when the stock market plummeted in the early days of the Covid-19 pandemic.

“We view the roadmap missteps to be a stunning failure for a company once known for flawless execution, and could well represent the end of Intel’s computing dominance,” Chris Caso, an analyst at Raymond James, wrote in a research note on Friday.

Swan says where a semiconductor is made isn’t that important. However, domestic chip production has become a national priority for China, and some U.S. politicians and national-security experts consider sending this technical knowhow overseas to be a potentially dangerous mistake.

“We’ve seen how vulnerable we are,” John Cornyn, a top Senate Republican, said in June when U.S. lawmakers proposed an estimated $25 billion in funding and tax credits to strengthen domestic semiconductor production.

Many of these processors are made at facilities in Oregon, Arizona and New Mexico. If Intel outsources this work, it would likely be done by Taiwan Semiconductor Manufacturing Co., which focuses on production and is currently the world leader. It’s based in Hsinchu, one of the closest Taiwanese cities to China, which considers the Asian island a rogue province rather than an independent country.

“With the latest push out of process technology, we believe that Intel has zero-to-no chance of catching or surpassing TSMC at least for the next half decade, if not ever,” Susquehanna analyst Chris Rolland wrote in a research note. He thinks Intel should sell its plants to TSMC, although he says that’s unlikely.

Over the years, Intel has spent tens of billions of dollars updating its factories, and all of Swan’s predecessors touted them as a crucial advantage that kept the company ahead of the rest of the industry. As the largest chip producer, Intel benefited from economies of scale and attracted the most experienced engineers and scientists.

The rise of smartphones and other mobile devices changed all that. Intel dabbled in mobile chips, but never committed its best production and design to the area, preferring to prioritize its existing PC and server chip businesses. When smartphone sales took off, phone makers used other processors from companies like Qualcomm Inc. or they designed their own, like Apple Inc. And TSMC factories churned these components out.

While Intel makes hundreds of millions of chips a year now, TSMC produces more than a billion annually. That’s given the Taiwanese company more experience to improve its factories, helping TSMC’s engineers overtake their Intel counterparts in technical execution.

Swan said on Friday that Intel’s products are still the best, despite the manufacturing delays. But by opening the door to outsourcing, the CEO endangers one of the last bastions of U.S. technology leadership.

“By outsourcing leading edge technology, presumably to TSMC, Intel would give up what has been its main source of competitive advantage for 50 years,” Caso of Raymond James said.